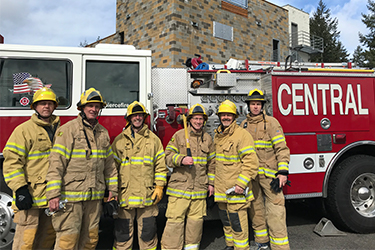 LAKEWOOD – It’s obviously indisputable that the men and women who fight fires for a living are professional athletes. To perform the demanding jobs at the high level they do, firefighters need to maintain optimal physical conditioning. It is also evident that saving buildings and lives is a dangerous job where firefighters face considerable personal injury in the line of duty. Like other athletes these firefighting heroes require quick, specific medical care following an injury, along with a fast return to good health and work.

Puget Sound Orthopaedics (PSO) surgeon Patrick J. Vaughan, MD, has treated many types of musculoskeletal conditions from athletic injuries during his many years as an orthopedic surgeon. Vaughan’s skills in treating the unique injuries typically suffered by athletes brought his name to the attention of the Tacoma Rainiers, where he currently serves as their medical director. He also is the team orthopedic surgeon for all of the University of Puget Sound’s varsity sports teams.

Recently, Vaughan was specifically recruited to join in a new partnership with the Central Pierce Fire Department along with Tactical Athlete Health and Performance Institute (TAHPI).

TAHPI is a relatively new and emerging company founded in Milwaukee, Wisconsin, in 2015 by physical therapist Luis Rivera Jr. Rivera based TAHPI’s mission on the premise that firefighters should be treated like professional athletes as their health and fitness is critical to meeting the demands of the job. His research strongly suggested that firefighters’ injuries were closely similar to those of athletes, but he also discovered that firefighters in many cases weren’t receiving the same rapid medical response as athletes. He set out to establish self-sustaining injury prevention and recovery programs around the country.

Meanwhile, early in 2016 Central Pierce Health and Safety Officer Adam Jackson had become concerned about Central Pierce firefighters’ injuries in relation to ease of access to care with rapid diagnosis and recovery. “Current access to having an MRI can take two weeks alone,” said Jackson. “Quick medical access is gigantic,” he added.

According to Jackson, “Firefighters have a Type-A personality and love what they do and want to get back to work. Frustration sets in when the injured fighter is not able to come back to work sooner,” he said. While searching for solutions online, he happened upon an article about TAHPI. Jackson decided to reach out to Rivera to inquire about bringing the TAHPI program to Central Pierce.

Over a period of the next two-plus years, Rivera, Washington’s Labor and Industries (L&I) agency and Jackson ironed out the final plans to move forward with the TAHPI program.

However, there was one critical missing piece: a local medical connection. Once Central Pierce Fire and L&I were on board with the new program, TAHPI personnel set out in search of a medical partner in the Tacoma area. Both Rivera and TAHPI’s Director of Clinical Operations, Bryce Nalepa, had previous sports medicine and athletic training experience and had already come to the conclusion that doctors who currently worked with athletes had a crystal clear picture of how to treat similar injuries found in both athletes and firefighters. They specifically wished to locate the orthopedic physician who provided care for the Tacoma Rainiers baseball players and ultimately satisfied their search upon locating Dr. Vaughan.

Not only did Dr. Vaughan sign on with TAHPI, but several of his PSO colleagues are a part of the program’s referral team, which includes: Drs. John M. Blair, Spencer A. Coray, Douglas M. Hassan, Peter E. Krumins, Michael J. Martin and Philip R. Yearian.

However, to become certified in the TAHPI program, Dr. Vaughan and his group of PSO surgeons were required to spend a full day training as “Firefighters for a Day” in late March. The training, with real-life firefighters while weighted down by head-to-toe full firefighter attire and gear, was intended to be realistically exacting in order for the doctors to fully comprehend the intense physicality that is demanded of firefighters. Likewise, physical and occupational therapists and other medical providers who had signed up for the program also attended the event and worked side-by-side learning to use the jaws of life and other essential tools.

Following the day of training, Nalepa confirmed that the doctors from Puget Sound Orthopaedics will become the first to be nationally certified by TAHPI.

(We) “already have had a patient come through that was seen by Dr. Vaughan,” says Nalepa. “Dr. Vaughan has been a great advocate for TAHPI, helping to find other providers in the area that would want to work with the TAHPI team.”

Nalepa further noted that PSO already has experience in managing an expedited urgent care referral protocol program where orthopedic patients are seen quickly and a plan of care can be established in a timely fashion.

Of the TAHPI program Dr. Vaughan concluded, “The “Firefighter for a Day” training is totally valuable in seeing what your firefighters – your patients – will have to go through when they get back to their job. It’s a lot of hard work. Putting on the gear and managing the tools of the trade takes a lot of physical strength, but it is also using your head to develop a plan for how you are going to attack different situations. As orthopedic specialists, we now fully understand how critical it is to not only provide immediate care for our injured firefighters, but also to properly and physically prepare them for the rigors of the job once they return to work.”

The TAHPI program at Central Pierce was officially launched on April 2.

Established in 1990 as Lakewood Orthopaedic Surgeons, Puget Sound Orthopaedics (PSO) serves the Puget Sound region with comprehensive orthopedic care in musculoskeletal disorders. The PSO team is comprised of 16 board-certified surgeons with subspecialties ranging from shoulder, upper and lower extremity, and sports medicine to spinal and podiatric care. They work with 10 certified physician’s assistants and a 100-member support staff to ensure a high level of contact and ongoing patient education, working together with the common goal of delivering expert, individualized and compassionate attention to every patient. In addition to three clinic locations in Lakewood, Tacoma and Gig Harbor, Puget Sound Orthopaedics also operates Lakewood Surgery Center, an outpatient ambulatory surgery center as well as Puget Sound Imaging, an MRI diagnostic imaging suite.

Watch the video about the Firefighter for a Day training and the TAHPI program on Pierce County Professional Firefighters IAFF Local 726 Facebook’s page.