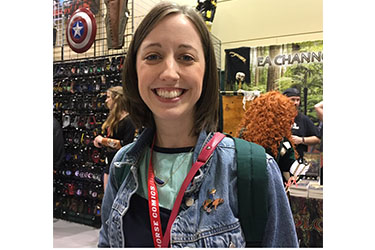 Cats, Music, Horror and Jessica. That would be the self-titled comic if one were to be written about Jessica Clark. She is very active and involved here at Puget Sound Orthopaedics: she’s an MRI tech, chair of the safety committee, and a part of our IT triage team. She has worked here for five years and loves collaborating with her imaging team. “They’re festive, fun, reliable, and like a family. I love working with them,” she tells me with a smile on her face. Jessica always knew she wanted to be in healthcare, and while she studied in college she volunteered in different hospital departments but was fascinated when she got to spend time in the x-ray department. From there it was set in stone as Jessica received her Bachelor’s in Radiologic Science. During her tenure with us she has also been cross-trained in MRI. “I love being involved in the process of patients’ healthcare and I actually get to see the before and after transformations in their imaging.”

In case you’re wondering about the title of Jessica’s biographical comic we just have to look at her hobbies, or the fur babies that wake her up – all five of them. Jessica has five Maine Coon mixes named Yahtzee, Obi-Wan, Sadie, Lucky, and Ouija. In one of Jessica’s own nine lives she was also a touring musician, playing piano and drums in a variety of bands with her boyfriend whom she later married. They recorded and performed for three years and at their busiest were scheduled to do six shows in seven days; yes, she’s a bona fide rock star. Jessica also loves being in the audience at concerts which is where she met her husband, and now the two spend their time engrossing themselves in horror movies and indie comics. Lastly, on Fridays with a dollar donation to Relay for Life employees are allowed to wear sports gear. You’ll always catch Jessica proudly supporting her Seattle sport teams: Mariners, Seahawks, Huskies and occasionally her in alma mater UNC’s Carolina Blue.

As much fun as Jessica might have had in a tour minivan she also enjoys more normal forms of transportation when she travels. Her favorite vacation was to Disney World with her family to celebrate New Year’s, but her dream destination is Iceland for its scenery and music. Her dream job would be a combination of her current career and one of her favorite activities culminating in music therapy. When asked if she would rather be a hamster-sized elephant or an elephant-sized hamster Jessica, with a moment of weighing the consequences, picked being a mini elephant because they’re unique animals and don’t have any predators. When tasked with picking between robot housemaids, moon cities, and flying cars Jessica selected having moon cities as it would be more environmentally friendly for our home planet of Earth.

Being a rock star and an imaging tech I only think it is suitable to say Jessica is bad to the bone, and we appreciate having her as part of our family here at Puget Sound Orthopaedics. Thank you for your five years of dedication and hard work and we are excited for our future with you!